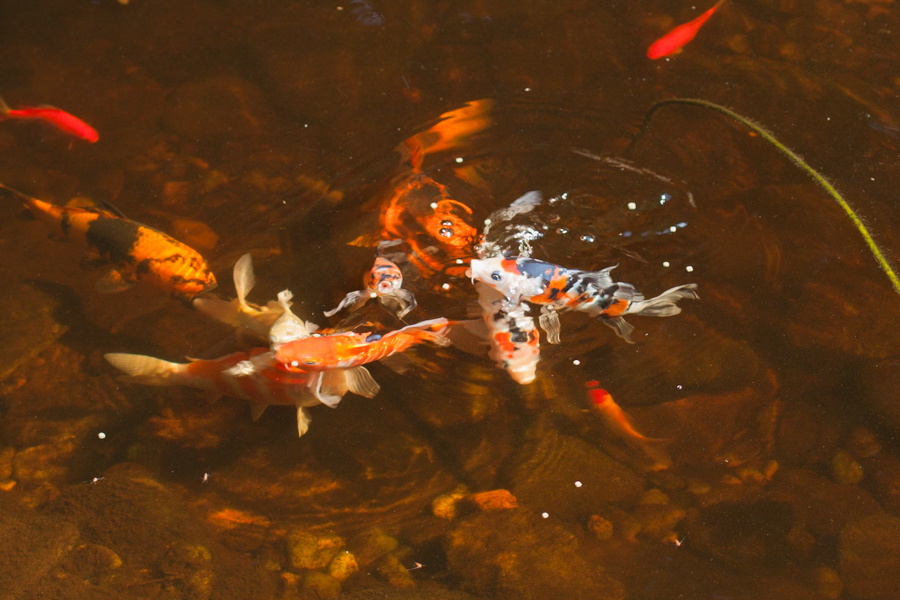 Koi fish have amazingly diverse patterns and colors and they have a very long lifespan ranging from 20 to over 200 years old but averaging around fifty years You can count the rings on their scales to determine their age! Read on to learn more.

Koi fish have not always decorated ponds; they were originally bred for food in Japan. A few of these colorful koi impressed their breeders so much they became highly regarded. This began their journey into ponds around the world.

Seeing large brilliantly colored koi fish inspired me to look into keeping them myself. Before I purchased a koi fish, life expectancy was a serious consideration, and it should be yours as well. Their life span determines the ownership commitment, which is crucial to ensuring that you will be able to give your koi a lifelong home.

Koi need a healthy diet to live a long life. But what is the best food for koi fish? Always read the label of any food you consider purchasing, and look for the following ingredients:

Most people keep koi in outdoor ponds due to their size. When designing their pond, consider the following:

Koi Fish For Sale In Arizona

Phoenix’s best choice in Koi fish is located conveniently in Peoria Arizona. The Backyard Pond has everything you need to start, maintain, and upgrade your backyard ponds. From the liner and aquatic plants to the Koi fish themselves we can help you get your dream Koi pond started. Stop by our store or give us a call to get your questions answered. Are you a koi fish enthusiast, fan or keeper? It won’t matter if you’re just starting with koi or a seasoned breeder, they always have something else to learn. Below are some interesting facts about koi, such as female koi’s are not only rounder, but larger than male koi fish.

It is thought that the koi fish originated within China, later being used by Japanese as a food source, which started to breed koi during the 1800’s for aesthetic appeal. Koi in their many beautiful varieties that we see today, are descendants of a black fish known as Magoi, better known as the common carp. They date back almost twenty five hundred years originating from Eastern Asia – in the Azov, Caspian, Aral and Black Seas – and from parts of China. Contrary to common belief Koi did not originate in Japan. Koi were brought to Japan with the invading Chinese approximately 200 BC.

The most popular koi fish in Japan is the Kohaku, which is a white and red koi, also known best as the koi you start with and the koi you end with. It is also the most popular in the U. S., as well as the Showa Sanke, and Taisho Sanke. Ogan Koi is more prominent even in inadequately filtered ponds because of their single color can be seen even in cloudy water.

When it comes to intelligence, the koi are rather smart. Similar to cats and dogs, a koi fish can be trained to eat from your hand, or some train koi to eat from their mouths. As koi are omnivores, they are known for eating pond plants. Some species of koi are also known to recognize their owners’ faces.

A Koi fish is able to grow to great lengths, up to 3 feet in ideal living conditions, such as a pond. However, if a pond is not deep enough, they can get sunburnt, and they need plenty of shade. Females are bigger than males, and koi do not have teeth. Ogon Koi is also the most favored by breeders because it is known to have a longer lifespan than multicolored Koi.

In the process of mating, it is common for koi to eat their recently hatched young, known as koi fry. It is important to separate the koi fish from the koi fry during mating season to ensure the fry is preserved. If breeders are raising koi that are highly sought, it can bring thousands of dollars per koi. For a prized koi, $250,000 is not unheard of. Koi, like many other types of fish, koi breed by spawning.

Most popular in Japan, the Kohaku is a variety of white koi with red patches.

The oldest known koi recorded was a legendary koi by the name of Hanako, which was hatched in 1751 and passed away in 1977, making it 226 years old. That means this koi survived through Industrial America, French Revolution, the United States formation, inventions of the automobile and electricity industries, World War I, World War II, and well into the Vietnam War. However, the average lifespan of koi is 30 to 40 years.

Although Hanako survived 226 years, the age of the koi could not be detected by the naked eye. The scales of a koi fish are covered by microscopic growth marks, similar to the rings on a tree. These marks indicate patterns of food shortage or rapid growth. Environmental factors also have a hand in how long your koi will live. In established koi ponds the quality of care is also a factor. The breed type may also determine lifespan.

Various virtues are symbolized by koi fish within Asian cultures. Koi are recognized as being symbols of endurance, perseverance, individualism and strength. In many cultures, tattoos representing koi are not uncommon, representing the overcoming of adversity. Koi are also associated with wealth and success. In Japan festivals are held for their positive qualities with family strength and development.

As koi are able to develop a wide range of colors, there are no surprises that every hue developed connotation. Metallic koi symbolize business success. Gold koi represent prosperity and wealth. Blue koi represents serenity, while Asagi koi of red, blue and grey color represent positivity. Black koi are considered to have patriarchal symbolism, with blue belonging to the son, red to the mother, and pink to the daughter. Koi fish have amazingly diverse patterns and colors. Personal preference is ultimately the deciding factor when you are choosing which Koi fish to choose to put in your backyard pond. Choosing Koi fish should follow a few guidelines to help make sure you are getting healthy fish. For people wanting to breed and sell Koi fish out of their backyard pond attention to color balance, body shape, and head shape become details that must be paid attention. Champion Koi conform to a list of elements that serious keepers, breeders, and judges look for.

This is the most influential of the 3 categories of attributes. The body, fins, and head should be free from any type of damage or deformities, such as scars, indents, bumps, or any element that throws off the overall symmetry of the Koi. The Koi fish head should be long and broad. The eyes should be set and equal distance apart and the same height. Koi fish symmetry is one of the most influential elements in selecting Koi fish.

The color on the Koi fish should be consistent over the body of the entire fish. While Koi may have multiple colors, each of the colors should have consistent saturation and uniformity. For example if your Koi has a bright orange spots they should be equal brightness and saturation over the whole body of the Koi fish. It’s best if there is a good balance of color that supports the symmetry. Each color present on the fish should be the same shade. This means the blacks should be black, not black and grey. Keep in mind that as the Koi grow the colors will change over time.

Balance is the key to visually attractive Koi fish patterns. Even distribution of pattern that is respective to the size of the fish is best. For example if a large Koi has a very small pattern it can seem as if there is something missing from the fish. In contrast a small Koi feels over whelmed if there is too much patterning present. Patterns that cover the entire fish evenly are sought after as they present a well balanced visual presentation. In addition when the nose and tail of a Koi fish are the same color it feels coordinated and the colors and pattern that exist between them feel framed.

The Choice Is Yours

These guidelines are ultimately for people interested in breeding, and competition. For your backyard pond you can choose to have whichever fish are visually pleasing to your eye. As we all know beauty is in the eye of the beholder and this is very true when it comes to fish. We all have our favorite colors and are attracted to different combinations of colors and pattern.

Koi Fish For Sale In Arizona

Phoenix’s best choice in Koi fish is located conveniently in Peoria Arizona. The Backyard Pond has everything you need to start, maintain, and upgrade your backyard ponds. From the liner and aquatic plants to the Koi fish themselves we can help you get your dream Koi pond started. Stop by our store or give us a call to get your questions answered.